Police have warned dog owners to keep their pets on leads when walking on farmland after six lambs were mauled to death. 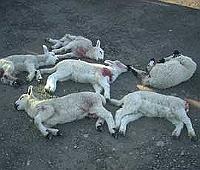 Lancashire Police released this shocking image showing the aftermath of a vicious dog attack on sheep in Burnley.

Officers were called to a farm on the border between Burnley and Bacup after reports of a dog attacking sheep on the moor near the farm. On arrival they found six small lambs had been attacked and savaged and two sheep, one of which was still alive, had been severely injured. Vets had to put down the sheep a short time later. A further two sheep had run away from the dog into a deep bog following the attack last Saturday afternoon (4 May).

PCSO Dave Johnson said: “The farmer was visibly upset, as not only had these animals been savaged, but one lamb had it’s head bitten clean off. He had no choice but to shoot the dog to stop it causing more damage. We’ve since spoken to the dog owner about what happened.”
“Incidents such as this are rare and we’ve carried out regular patrols, leaflet drops and put signs up in many rural areas warning dog walkers of their responsibilities. Dog owners should be aware that in extreme circumstances such as this, farmers have the right to shoot any animal worrying their livestock. The farmer in this case was inconsolable by what happened.”

“When walking on farmland, or in the countrywide, dogs must be kept under control and when walking near livestock they must be on a lead,” he added, “Instinct can take over when a dog is not on its lead – especially if it is with another dog – and this can lead to attacks on sheep, which not only cause suffering to the animals, but also to the farmer, whose livelihood can be affected.”

In a separate incident in the county last month, a sheep was mauled to death in Briefcliffe. After the attack, officers handed out posters to dog walkers asking them to take care.

Nationally, there were about 700 cases of sheep worrying by dogs last year.

Regarding the use of dog poop bags…

There have been a number of cases where the bags have been discovered in the stomachs of cattle and sheep.

Please see the newsletters page for full listings of events and activities.

Please do submit any pictures, or written material of interest that you may have, contemporary or archive, for this, your village website, or any ideas for additional content, to: submissions@upperheyford.com