About 1 mile (1.6 km) to the east of the village is the former RAF Upper Heyford airbase. 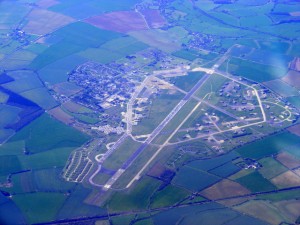 The base was used by the RAF from the 1920s as a bomber base, then in the 1950s assigned to the USAF. Since its closure in 1994, the base has become an industrial and commercial estate of some importance. The runway (once the second longest in Europe) is used to store new cars awaiting delivery to dealers. Several relics from the cold war remain such as the disused bunkers, water towers, huts and fences. There is a large number of ex-service houses immediately south of the base/industrial area which are rented.

A planning application for RAF Upper Heyford was underway in 2007. The plan proposed the protection of most of the historic elements of the airbase. However, most if not all of the bungalows south of the airfield would be demolished to make way for about 1,000 new houses.

For more information about the airbase, please visit the Wikipedia page here.

This website uses cookies to improve your experience while you navigate through the website. Out of these, the cookies that are categorized as necessary are stored on your browser as they are essential for the working of basic functionalities of the website. We also use third-party cookies that help us analyze and understand how you use this website. These cookies will be stored in your browser only with your consent. You also have the option to opt-out of these cookies. But opting out of some of these cookies may affect your browsing experience.
Necessary Always Enabled
Necessary cookies are absolutely essential for the website to function properly. This category only includes cookies that ensures basic functionalities and security features of the website. These cookies do not store any personal information.
Non-necessary
Any cookies that may not be particularly necessary for the website to function and is used specifically to collect user personal data via analytics, ads, other embedded contents are termed as non-necessary cookies. It is mandatory to procure user consent prior to running these cookies on your website.
SAVE & ACCEPT